Speaking at Layar events in New York and San Francisco

Layar hosted two events in New York and San Francisco this summer, and I was invited to speak at both of them about the technology side of layer development. As a member of the Layar Partner Network I represented this Layar collaboration network with all its members who dedicated their Mobile AR development business to Layar. The main goal of the events was to encourage more U.S. developers, brands and agencies to engage with the Layar platform but also to learn about local needs and insights.

People drove and flew in to New York from Philadelphia, Connecticut and even Seattle. Claire Boonstra, co-founder of Layar and head of content and community gave a general introduction to the Layar platform, Matt Miesnieks, head of customer development at Layar pointed out the business side of Layar and Maurice Groenhart provided background info on how Layar facilitates content creation. I gave a step by step explanation of the technical side of Layar and how you can create layers even if you don’t feel like coding using our Layar content management system Hoppala Augmentation. The audience was very active in terms of questions and sharing ideas, and I was very glad to meet some of the very influential AR bloggers in the audience such as Chris Grayson and Tish Shute. The event took place in the New York Fire Museum. This was arranged by Richard Jansen, a Dutch fire fighter, who is working on a fire fighters memorial AR application. 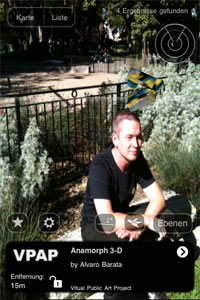 The San Francisco Layar event took place at the SoMa offices of Adaptive Path. Thank you very much Kate and the whole team for your hospitality! The Bay area audience was more tech oriented, so talking about layer development was a lot of fun and we ran into a very active technological discussion later on. Our friend Chris Manzione who is running the Virtual Public Art Project even set up some augmented piece of art to showcase Mobile AR in 3D.

All in all the whole trip was a great success. We talked to many interesting people, and we had the chance to bring people closer to Mobile AR and Layar. It was a lot of fun, very exhausting and a great experience!

P.S.: Many thanks to Paula Levine for video taping our tech session in San Francisco.

Marc René Gardeya is founder and CEO of Hoppala Agency, Germany. He built and operates Hoppala Augmentation, the world's largest developer community and content creation tool for geobased AR, and he received international recognition for rebuilding the Berlin Wall in AR on a consumer mobile device. He built AR experiences for several international campaigns, large scale tourism applications as well as non-profit educational projects. Marc is developing core technology in the field of mobile augmented reality and computer vision. He built the real time SLAM 3D optical tracker and the foundations of the monocular 3D reconstruction system on an iPad2 for Dekko Inc., San Francisco. He is an international speaker, mentor and trainer. Marc has a Masters degree in Mathematics and Computer Science and has been working in the field of software engineering for more than 10 years.
View all posts by Marc →
This entry was posted in Presentations, Trainings, Videos. Bookmark the permalink.